Lake Okeechobee is fishing better and better as we approach the spawning season. Fish are starting to fall into a pre spawn pattern, where you will see these big fish 8lbs and up feed heavily for the next few months. Target these fish in reeds with other types of vegetation around. These fish can be caught a number of ways, however, the main types of fishing lately has been flipping/pitching and soft plastic frogs. The fish tend to react to the top-water baits early and often whereas the flipping bite picks up as the sun starts to warm the water.

One other type of fishing that has produced a number of good stringers as of late has been the popping frog bite around hydrilla. This is a fun and exciting pattern to find because the fish explode on these frogs and making anglers think every bite is a monster fish. Black or green has been the primary color as of late with different anglers catching fish on different variations of these two primary colors. Working the frog extremely slow has produced the best best results with some bites coming after letting it sit for 30 seconds dead still. The average time I would recommend would be a good 5-10 second count and then pop it a few times following another 5-10 sec pause. I would say over 75% of the bites come with the frog sitting still.

The picture above is a fish I caught on the new avenger made by Bruiser Baits in the CTT tournament on 10-06-12. She weighed just shy of 8 and a half pounds, what a beauty and just wait within the next few months she will be a double digit fish. That big girl brought home big fish honors for the tournament that hosted 50 boats. There where several other big fish weighed in around the 6-7 pound mark. Congratulations to Norris Newhouse and partner, they won the tournament with just over 32lbs, WOW! that is over a 6 lb average. 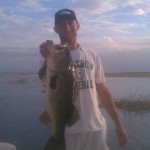 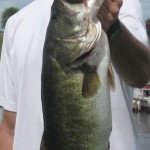